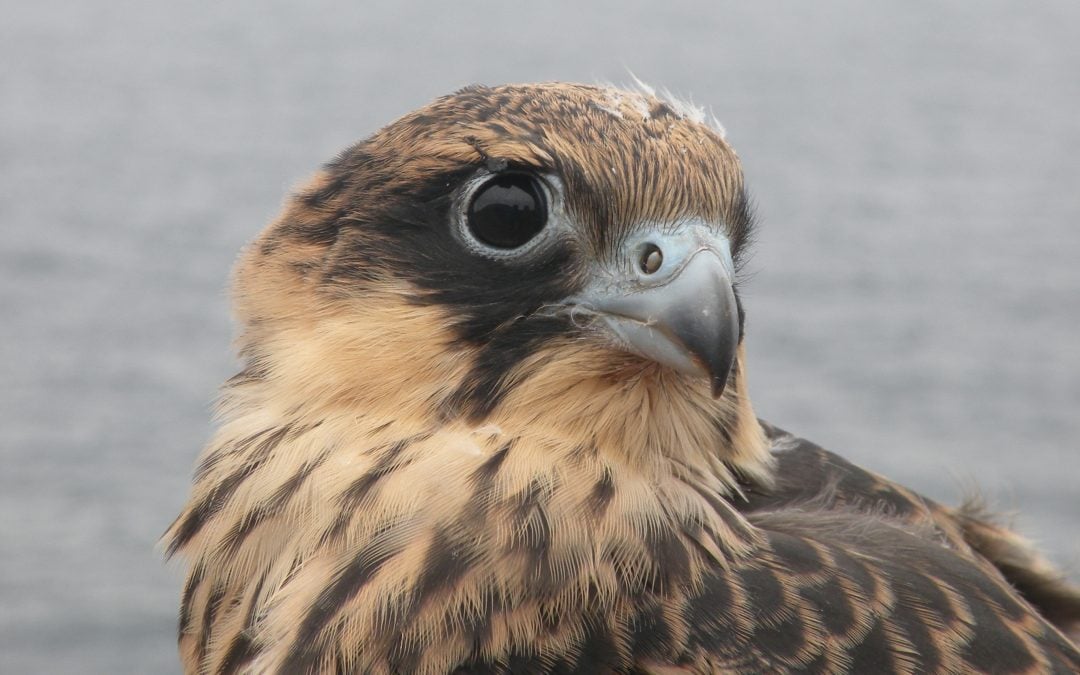 Birds are our first big passion. There are many Species we’re lucky enough to encounter, both in Lanzarote and the Marine Reserve Islands. Sharing our knowledge with island visitors, helping them to find or understand the local birdlife. This is our happy place! The eco-insider bird watching tours come in two main forms. Firstly the Desert Birdwatching in Soo, Lanzarote. In addition to this we also offer a Remote Islands Birdwatching Tour.

The islands Alegranza, Montaña Clara and Roque del Este are considered the only Atlantic nesting colony of the Eleonora´s falcons. During the last 9 years, the Alegranza colony has been studied by Dr. Laura Gangoso, She works for the University of Amsterdam, furthermore her study is probably the worlds highest standing research on the species!

We know that the colony has approximately 140 pairs. Each pair producing on average 2-3 chicks. The falcons homeland is Madagascar and they fly every May crossing the whole African continent to the Archipelago ‘Chinijo Canary Islands’ to breed. They even adapted their breeding time to coincide the hatching of the chicks with the autumn migration. 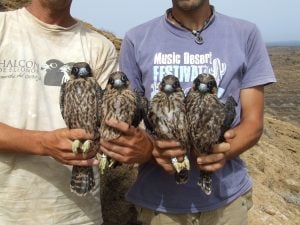 The little passerines migrating from Europe to Africa cannot cross the Alps and the Pyrenees. Therefore, they have to go through either the eastern flyway (Mediterranean). This flight is not without it’s dangers, they risk being shot as they encounter countries like Malta or Cyprus. In addition the second route is the western flyway. Dangers here include being pushed off route through the coast of Portugal due to strong trade winds on the Atlantic ocean. It is believed that millions of song birds perish in the ocean by not finding land.

The lucky ones who make it to the Canary Islands will first see the island of Alegranza. Here they will be greeted by the falcon colony! From the boat on our remote islands tour, we often observe aerial acrobatics. Often the little birds hide on the boat being more afraid of the falcons than of the humans.

Clients often express an urge to land on Alegranza. This is something we never have, and never will do. There are four islands within the Archipelago Chinijo, (other than Lanzarote). They each have similar conditions, but only one island has a little village. La Graciosa has around 500 inhabitants. The falcons nest on all of the smaller islands except the one with the village. Wonder why?

Occasionally there have been trekking excursions to Alegranza. After one such excursions, it was noted that 5 nests with eggs were abandoned. The birds sit on the eggs not only to protect them from the cold, but also from the sun. The conditions in September mean that if the birds are disturbed, the eggs will literally cook! The only sustainable way to approach the uninhabited islands is to observe nature from the boat. In addition to the stunning geology the birds generously get close enough, so that even the most demanding birder will feel satisfied.

As avid birdwatching and nature lovers, we encounter especially exciting times from September to October. The uninhabited islands on the north of Lanzarote become the second largest world nesting colony of the Cory´s Shearwater.

At the Remote Islands Boat Trip In the last weeks before November we can observe “carpets” of young shearwaters on the sea! They fly around the boat, so we can observe them closely enough. The dynamic flight of the shearwater just above the surface of the ocean, sometimes touching the waves with their wings, is one of the most elegant and delightful shows that nature can offer!

The shearwaters live on the ocean off the coast of South America. For the first few years of their life they don´t even need to touch land. They have a gland in their beaks to desalinate water. Therefore, they feed and sleep on the ocean. They can dive up to 20 metres to feed too! In March they arrive to the Canary Islands to nest, (following the streams of pelagic fish).

The colony estimated on Archipelago Chinijo is 11 thousand pairs (source: WWF). Each pair has one chick only, which both parents feed diligently. They nest in caves and holes on the cliff. Before developing feathers, the chicks are bigger and fatter than their parents. After developing feathers, the parents suddenly stop feeding the young and the chicks have 2 weeks to digest the excess fat. After that they throw themselves to the sea in large groups. This is how they learn to fish and fly! 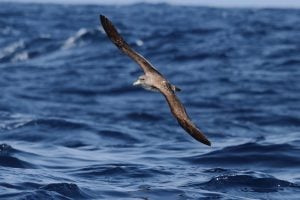 In the past the people of Lanzarote and La Graciosa collected huge amounts of young shearwaters. They used their meat and fat as a means to survive. Consequently, this almost drove the colony to the point of extinction.

Fortunately shearwaters are currently protected since people have other food alternatives, therefore the colony has recovered. Although there are still problems, with illegal poaching by people exercising their “rights to tradition”. Alegranza has the second largest world colony. The largest colony is in Ilhas Selvagems. (Savage Islands belonging to Portugal) to the north of Lanzarote. Both locations are uninhabited islands. Wonder why the shearwaters chose them too?

Thank you for reading